Application of solenoid in automobile headlamp

Application of solenoid in automobile headlamp

As the most bright eyes of the automobile, the automobile headlamp has become better and better after years of development, and the electromagnet has been used more and more widely above it, such as now widely used xenon headlamps, LED headlamps, laser headlamps and other light-changing machinery are using electromagnets to achieve its functions. Compared with the traditional headlamp, the headlamp with Lens headlamp has the advantages of uniform brightness, strong penetration and small light loss. There are two kinds of lens lamps for vehicles: Single Light and double light. When the high beam is turned on, it operates the dimmer plate through the electromagnet mechanism, so that the low beam light is also distributed to the high beam, which means that two high beams shine together. Double Light Lens is generally used in high-grade cars above, but also can be modified according to need. 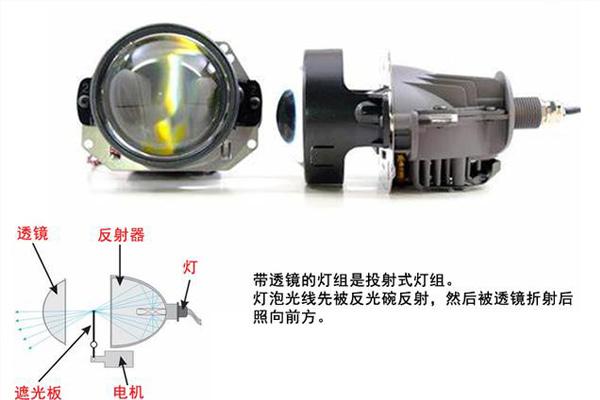 Lens with the Lamp Group, known as the "projection of light group. ". The beads are behind the Lens. After the light is illuminated, the light is reflected by the reflector and projected to the Lens, which then refracts the light to the front. As the light path increases and there is a large gap between the light bead and the Lens, especially when turning on low light, you need to use a mask to block the light falling on top of the Lens, which means that the light is wasted. So there's a lot of light loss. Here, the working principle of the two-light Lens is to get the headlamp switching signal, turn on the ELECTROMAGNET, adjust the angle of the Lens, so that the original out of the far state into the near state, or the near state into the far state. Warm tip: generally speaking, it is low light with a Lens, and High Light Without a Lens; why so? Because, low light is the most commonly used in urban roads, low light with a lens, open low light when the lights will produce a very obvious light source tangent line; what is the light source tangent? To put it simply, a low beam automatically cuts off excess light and retains useful light; that extra light is the light that hits the driver coming in the opposite direction, and that useful light is the light that hits the road.